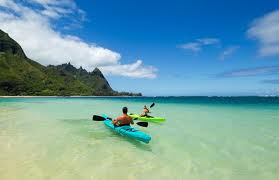 Hawaii is like no other place on earth. Home to one of the world's most active volcanos and the world's tallest sea mountain, Hawaii is the birthplace of modern surfing, the hula and Hawaii Regional Cuisine. It is also a former seat of a royal kingdom and home to the only royal palace on U.S. soil.

Hawaii is one of the youngest geological formations in the world and the youngest state of the union. But perhaps Hawaii's most unique feature is its aloha spirit: the warmth of Hawaii's people that wonderfully complements the Islands' perfect temperatures.

There are six major islands to visit in Hawaii: Kauai, Oahu, Molokai, Lanai, Maui, and Hawaii Island (affectionately known as the 'Big Island').  You'll find each island has its own distinct personality and offers its own adventures, activities and sights. Mark Twain called Hawaii, "That peaceful land, that beautiful land... the climate, one long delicious summer day, and the good that die experience no change, for they but fall asleep in one heaven and wake up in another." We invite you to explore the "Islands of Aloha" to find your own heavenly Hawaii experiences.